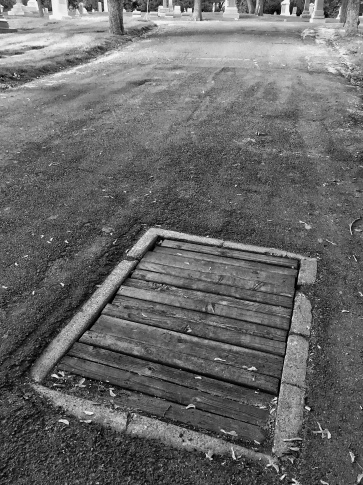 “Don’t you go by the Grave Door ya hear?” Grandma Flo yelled from the porch swing. I waved back, pretending I hadn’t heard and marched on down the street.

“The Grave Door?” asked Sally, her blond curls cupping up under chin. She looked angelic in the evening light, her green eyes glowing with fear and excitement.

I smiled my most mature ten-year-old smile and said, “Yeah you’ll see!”

Together we raced toward Oak Hills community cemetery, only two blocks from my own home. The raged stone and chain fence that surrounded the space witnessed our secret entry. Beneath a low hedge of faded wisteria, we paused looking to make sure the coast was clear.

“Tom, should we even be here?” Sally asked again, grabbing hold of my hand as she spoke.

“Of course we are, we’re not gonna hurt nothin’ right?” I said with a smile and a wink.

Sally’s smile was wand as the light in the sky grew dim, and it was then I realized how much I had fallen for her.

“We’re almost there, just a bit further down this path and then you’ll see it-”

“The Grave Door?” she said, apprehension flashing within her eyes.

I felt myself smile even wider with a wicked glee and nodded in assent. Sally gulped and we quietly began to weave between headstones and markers alike.

And in the last rays of the even sun, we found it, nestled at the bottom of the lane.

“There it is!” I hissed pulling Sally close, I could feel her body grow tense.

She looked up at the sky and drew in a tight breath and said, “it’s time Tommy, let’s do it now.”

“Okay,” I said feeling a cresting wave of hysteria, “I’ve got the stone.”

Around us, trees shifted in the cool October air casting a greenish-blue shade over everything. There before me was the Grave Door, inlaid with concrete and stone. Old slats of yew wood held fast with iron nails secured the entrance below.

“Be careful, Tom!” Sally hissed from behind a cold faced angel as I stepped away from her warm embrace.

In full view of anyone watching I stood right on the black paved lane clutching tight to my rock. Taking three steps I stopped in a patch of shimmering sunlight and said the words the old Hag had told us never to say.

And with that my rock was tossed high into the air a bull’s eye directly on the Grave Door.

With a plunk it wedge in fast between two slats and held fast to the wood.

Utterly astonished I stared in wonder as the rock twisted round like a knob. Wind shifted about my head, rustling leaves as I turn to face Sally. Her face was horror-stricken as she looked past my feet to the door now vibrating in its cement lining.

A low hiss escaped from between the slats of yew as I felt myself stumble back. It was then that I saw my sneaker smoking upon the ground, their soles melting into the asphalt.

I gasped and cried out as heat seared my toes. I felt to the ground and rolled to the curb, skin, shirt, and pants hissing loudly. Sally was screaming as the hiss became a roar. Wood splintered beyond my spinning head.

Something grabbed at my shoulder, turning me over and I screamed out again, thinking the worst. It was Sally with her golden white hair brushing against my face.

I stood up, feeling cold, wet grass seeping into my socks and looked back at the now glowing Grave Door. The sneakers were gone, replaced with smoking tread marks. The cemetery seemed to spin all around us as we ran, willing the perimeter fence to appear.

Behind us, wood splintered and cement shattered as whatever was underneath lurched free.

A scream deep and harsh sounded from beyond the twisting wisteria bush, piercing our ears to the bone. I felt wetness flood from my nose and each ear as we sobbed our way back to the road.

Sally looked back once, her face stained with flowing blood, but after that, she just ran faster. We jumped out onto the deserted main road, wet, bloody, and shaken.

“What . . . was that?” Sally whimpered between breaths.

I shook my head, unable to answer, whatever it was hadn’t followed. Silence gathered in close around us as we peered into the brush, but only the wind whispered it’s greeting.

“I don’t know what we did, I thought it was a joke,” I said, guilt flooding my voice.

“We’d better get back home-” Sally began, but that was when the screaming started, on the street perpendicular to ours. A screeching of tires could be heard as a series of pops and crashes sang out. And then with an ear-splitting roar, a car careened onto the street. It’s doors hanging askew and the windows erupting in flames.

We looked at each other as more screams sounded from the street.